You know, I am not a big fan of anime.
The only anime series I had an interest in was Dragon Ball and its subsequent series because I grew up watching it.
If a good anime was on TV that I had heard good things about, I would watch it but I had never considered any anime to be one of the greatest TV series I have ever seen.
However, all this changed when I saw Death Note.
Oddly enough, I have the notoriously hated Death Note Netflix adaptation to thank for discovering this series.
I saw many reviews condemning the movie for how it differentiated from the anime and manga, in the worst of ways.
Many people drew comparisons to the anime in their reviews and this is where my interest peaked.
Reviewers talked about amazing characters, themes of religion and what justice is and all of this wrapped up in an exhilarating cat and mouse game between two geniuses.
I made sure to buy Death Note as soon as I could and I was stunned at how incredible this show really is.
Death Note is a show with almost no action and yet every episode was so intense and had me on the edge of my seat to see what would happen.
The Death Note anime is actually an adaptation itself of the manga series, with the same name.
It follows Light Yagami, a high school student in Japan, who comes across the Death Note, a book that can kill anyone if you write their name in it.
Accompanied by a Shinigami, a god of death, named Ryuk, who acts as a spectator, Light takes on the name Kira and sets out to rid the world of criminals by using the Death Note and create a new world, where he is God.
However, Light’s goal is not secure because the world’s greatest detective L, who becomes aware of the mass killings of criminals, sets out to catch Light.
And so begins an intense game of cat and mouse between the two, with Light trying to kill L before he is caught by him and L trying to catch Light before he is killed by him.

If I could describe Death Note in one word it word be fascinating.
Everything about Death Note is fascinating, from its religious themes and it presenting the question of what justice is to the audience, to Light and L’s game of cat and mouse.
It was amazing to watch these two geniuses try to outsmart one another through their constant, expert use of lying and manipulation.
I was astonished by how quick the two were to constantly outsmart the other’s full proof plans.
The conflict between Light and L was the definite highlight of the series, amplified by how great both characters are.
L was definitely my favourite of the two, with his quirky characteristics and his amazing levels of deduction blending seamlessly.
It was a delight to watch him pose a serious challenge to Light, through his amazing abilities of manipulation and deduction skills, in ways that no else could.
His standout moment, strangely enough, comes when we do not know what he looks like.
It is in the second episode and truly shows how much of a threat he will be to Light’s plans for a new world.
The fact that L is such a great character, despite us knowing almost nothing about his backstory, even his true name, shows how great of a character he is.

In comparison, Light is also thrilling and mysterious.
He is almost, if not just as smart as L but his Death Note gives him a considerable edge.
And, although Light is setting out to make a better world, his way of doing so and one of his main motivations raise serious questions about his morality and lead the audience to ask some very hard questions concerning their own morality.
Many people like Light and want his plan for a new world to succeed and this is actually quite amazing, considering that in any other series Light would have been the villain.
Although he is trying to make a better world by killing criminals, Light will stoop to no lows, killing completely innocent people if they get in his way and even goes as far as considering to kill his own family, when they get in the way as well.
Light also has a god complex, seeing himself as a god who will build the new world and punish anyone who defies him.
In the beginning, I was actually kind of rooting for Light but, by the end of episode 25, he had become a character I loved to hate and I wanted to see his downfall.
Light is also just as mysterious as L but not in the way you think because it is actually up for debate whether Light is evil or if the Death Note corrupted him.
At some point in the story Light temporarily loses the Death Note, removing all of his memories of it.
As a result, he becomes a law abiding citizen and would never do the things he did when he had the Death Note.
However, when he gets it back, he goes right back to his end game of creating a new world by any means necessary.
It raises some interesting questions about who Light is as a person. 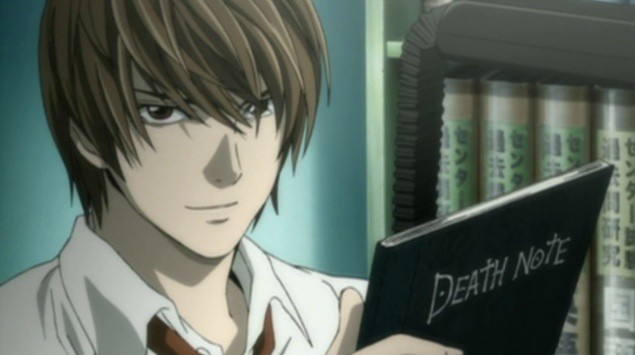 If either Light or L had been done even slightly wrong, the whole story would have fallen apart but to have both characters done so fantastically makes the story just incredible.
And Light and L are not the only great characters in the series.
Ryuk is also a great character and his role as a spectator had great importance because it was through him we learnt how the Death Note worked.
Other characters like Light’s father Soichiro and Light’s devoted follower Misa Amane are also great and have importance the story.
Two of my particular favourite characters along with Light, L and Ryuk are the two cops Touta Matsuda and Shuichi Aizawa, who were both interesting characters.
If you add this great cast of characters to its fantastic story and its themes of religion and justice, then you have an incredible show on your hands, which is exactly what Death Note is.
Death Note could do no wrong in my eyes.
But then episode 25 happened.
This episode is infamous among fans of Death Note because it completely shakes up the dynamic of the show.
Everything changes after this episode and the show feels very different from what is was before.
The problem with this?
After this point the show is great rather than fantastic
I still love the show after episode 25 but it is nowhere near as good as it once was.
Without the dynamic we had earlier, it feels like something is missing and some of the new characters are not as good as they could have been.
For example, after episode 25 we are introduced two new characters named Mello and Near, who L has been training to be his successors.

These two characters are pretty weak compared to the other characters, with them being represented as types of L’s personality rather than actual characters.
Mello represents L’s emotional side, while Near represents his calculative side.
I just wanted a little more character development from them.
A lot of people seem to think the show should have ended after episode 25 but I do not believe this.
There was more story to tell and things to resolve so the remaining 12 episodes were necessary.
However, that being said, I do wish the show had maintained its original dynamic because, if it had, it would have been fantastic the entire way through.
And, even though after episode 25 the show had a downgrade in quality, the show was still great so this will not deduct a point from my overall rating.
Death Note is a masterpiece.
It is a fantastic anime and TV series that has you on the edge of your seat, even with the downgrade in quality after episode 25.
It has a great story, great characters and great themes and symbolism.
It is already one of my favourite shows, due to its gripping story that had me engaged, right to the end.
I highly recommend it.