In the months leading up to Uncharted: The Lost Legacy I learnt, much to my surprise, the game was not a DLC to Uncharted 4 but a standalone game.
This made me wonder though, was The Lost Legacy going to be a new and unique game in the Uncharted series or just a glorified DLC?
My concern about the game kept me from buying it during the first two weeks of its release, but when I finally bought it were my fears abated?
Well not for the first two hours of the game.
The Lost Legacy opens with Chloe Frazer, a character from Uncharted 2 and 3, searching for clues to the tusk of Ganesh, an ancient Indian artifact.
With her is Nadine Ross, one of the villains from Uncharted 4, and instantly I’m concerned.
Did the game just cop-out of showing us how they came to work together?

After a round of slightly entertaining gameplay through a war torn city, we are thrust into an open world segment where we can take part in pointless treasure hunts, finding artifacts that have nothing to do with the main story.
For the first hour of this open world segment, I mistook finding these artifacts as something you had to find to move the story forward and I quickly became very bored of it.
The gameplay in this segment is nothing new either, with it being almost exactly the same as Uncharted 4’s gameplay, with slight differences.
For example, you can now pick locks to open doors and get weapons, and take photos of the landscape (that last one is pretty pointless though).
The Lost Legacy simply did not need this open world segment.
A more linear approach would have worked better and spared me the time of mistaking all those pointless treasure hunts as something I had to do to complete the game.
However, although I did find the open world segment unnecessary, I cannot deny  its beauty.
In fact the whole game is beautiful, showing the best graphics 2017 has to offer.
I lost count how many times I found myself staring in wonder at the screen at the amazing graphics, which highlighted the beautiful Indian landscape

after this, the game changes completely and almost all my fears were put to rest.
The gameplay quickly gets better, introducing fun action set pieces and even some of the funnest puzzle pieces in the Uncharted series.
My personal favourite puzzle piece being the one with the statues that try to stab you and you have to jump to the safe spaces, where you won’t get hit.
The story also gets better, introducing an interesting twist halfway through.
However, the story does result to some cliches, which do get very annoying.
I rolled my eyes when the villain of the game Asav leaves you to die by a death trap rather than kill you himself, something which would obviously lead to my inevitable escape.
The connection between Chloe and Nadine also makes the game better as they have great chemistry, which is just as good as Nathan and Sam’s in Uncharted 4.
It was also great to see their interactions change over the course of the game from working together only for personal benefit to a mutual partnership. 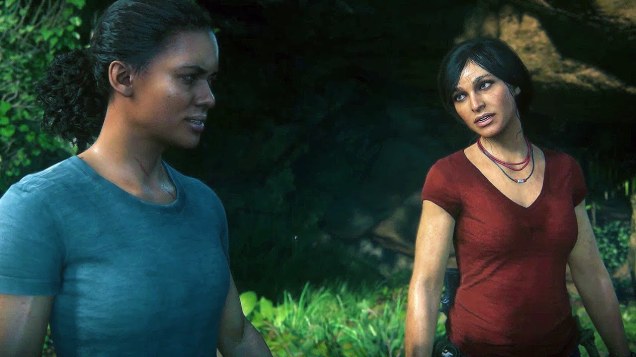 This game is also the funniest in the series.
The ending had me burst out laughing, the first time I have ever done this while playing an Uncharted game.
This all culminates in a giant action set piece of an ending, which (although seeming to be ripped right from Uncharted 2) left me speechless.
Overall the game’s story and gameplay does start off a bit rocky, offering nothing exactly new but the story takes a detour after the first two hours and the gameplay becomes more exciting, making it worth it.
It doesn’t quite fit the definition of a glorified DLC or a new and unique experience, it falls somewhere in between.
Nothing special but worth playing.