In issue 177 of The Walking we got to meet more news characters, saw ones we had not seen in a while and had a few interruptions of intimate moments (wink).
The issue starts off with Rick reading a poem Mikey wrote about the death of his mother.
It was nice to see Rick again, who had been absent for three issues, which is apparently the longest time he has ever been absent in the series.
The scene between Rick and Mikey was very touching because of how Rick reacts to Mikey bringing up Andrea’s death.
Rick comments that he, “wouldn’t even know where to begin,” when writing a poem about her.
I like that Rick is still shown to be grieving Andrea, something that will probably take him many issues to bounce back from.
Although, it should be said that Rick will never be completely the same, considering that he loved her more than Lori.
Next at the Hilltop, we saw Maggie and Dante choose the absolute worst spot to hook up.
Seriously, if Maggie wanted to be discreet about her and Dante’s new relationship why did they choose a weapons shack where anyone could walk in?
Naturally, someone does and after that awkward situation we meet two new important characters named Sebastian and Mercer.
Sebastian is the son of Governor Milton and Mercer is his bodyguard.
Unfortunately for Mercer, Sebastian is a jerk who sees Mercer as below him, even though Mercer just saved him and his girlfriend’s life from multiple zombies.
This, however, did lead to a very funny moment where Sebastian criticized Mercer for not being able to handle two Walkers quickly and in the very next panel it reveals there were actually more than ten of them, which Mercer killed.
Then we finally get the conversation between Michonne and her daughter Elodie that had been built up the past two Issues.

This was one of my favourite moments of Issue 177 because we learnt that Elodie is a real chip off the old block, when she reveals she murdered the men who raped her and murdered her sister.
This was very surprising to me because I thought Elodie would have found The Commonwealth early on and not had to resort to violence previously.
But no, just like Michonne, she has had to kill people to survive and knows exactly how bad things can get.
This may prove to be very interesting as their relationship progresses, with Elodie maybe helping Michonne in battle, instead of Michonne having to constantly protect her.
After this however, we get what I feel is the weakest part of the Issue and that is the cliffhanger.
Mercer meets with another soldier named George and the two discuss overthrowing Governor Milton, only to see Siddiq has overheard this conversation. 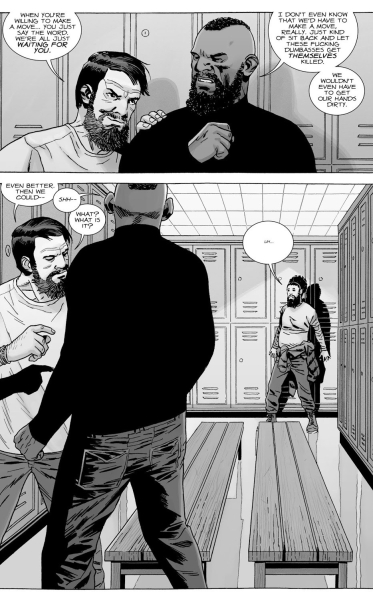 I do not like this cliffhanger for two reasons.
Number one, if Mercer and George were not just blowing off steam and are actually planning to overthrow Governor Milton, then this is happening too quickly.
The group just arrived at The Commonwealth.
It would have been better to have them, and thus the readers, get a better sense of the community before introducing this plot line.
Number two, this cliffhanger seemed way too similar to the scene Issue 89 when Glenn overheard Nicholas conspiring to kill Rick.
However, this might not turn out so bad if Mercer is just blowing off steam and I really hope he is because Mercer seems like a good character.
Overall, Issue 177 was a good Issue.
It introduced us to some interesting characters like Mercer and Sebastian and I really liked where Kirkman took Elodie’s story.
But the scene between Maggie and Dante was kind of dumb considering the loss of logic on Maggie’s part and I did not like the cliffhanger.