Given all the hype surrounding Thor: Ragnarok, with many people, including Joss Whedon himself, calling it a masterpiece, you would expect it to be one of the best Marvel movies, right?
Well, sadly not because, while I do believe the film is good, Thor: Ragnarok is certainly over hyped.
It is a very decent film and I would urge people to go and see it because the film is a lot of fun but, at the same time, I do think people are over praising it.
The film features the return of the goddess of death Hela (Cate Blanchett), who attacks Asgard and traps Thor (Chris Hemsworth) and Loki (Tom Hiddleston) on a garbage planet, where Thor is forced to fight in Gladiator matches, where he runs into The Hulk (Mark Ruffalo).
The Thor movies are considered, by most, to be the worst films in the Marvel Cinematic Universe so the new Thor movie definitely needed to do something different.
Enter director Taika Waititi, who turned Thor from one of the least interesting Marvel characters into a comedy star. 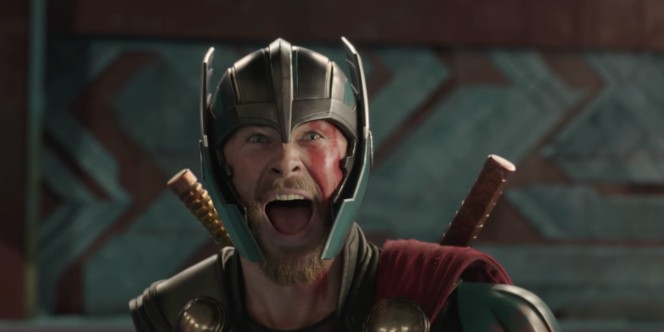 This new entry in the Thor series feels like it has more in common with Guardians of The Galaxy, than the previous Thor films.
Thor: Ragnarok is definitely a comedy first and super hero movie second.
The film has some excellent jokes, some of the best in any Marvel film.
My favourite joke had to do with the introduction of Valkyrie (Tessa Thompson), which left me in a fit of laughter.
Another hilarious thing about the movie is the character of Korg, played by Waititi himself.
Korg is basically the comedic relief and he gives a lot of the best jokes in the film.
However, while the comedy route is welcome, there is too much of it.
Both Guardians of The Galaxy films were comedies but they knew when to crack a joke and when not to.
As a result, these films were able to have big emotional moments but Thor: Ragnarok doesn’t know when not to crack a joke, going as far as to put them in the big emotional scenes, almost ruining them.
It is not only the jokes that ruin these emotional moments but how they were handled as well.
At the end of the film, when Thor fights Hela, something happens to Thor that is quite shocking but they cut away from it so fast that there is no emotion to it.
Another disappointing thing is the dropped sub plot with Bruce Banner and The Hulk.
Banner tells Thor something about The Hulk that you expect to come back and be a big thing later but it never does.
Also, let’s be honest here, if it was not for Blanchett’s great performance as Hela, her character would be entirely forgettable.

Hela is no different from almost every other Marvel villain we have seen.
She wants to take over the universe and submit everyone to her will, blah, blah, blah, evil stuff.
However, like I said, the movie is not bad, it is just over hyped.
There are still a lot of really great things about Thor: Ragnarok.
For starters, the visuals are stunning and the CGI on display is really good.
The action is also riveting, with the fight between Thor and Hulk being a particular standout.
We are also introduced to new and interesting characters.
I already mentioned Korg, who is a great comedic relief character but there is also Valkyrie, who is sure to become a part of the Avengers and The Grand Master, played magnificently by Jeff Goldblum.
Surprisingly though, my favourite new character was not any of the main ones but a side character.
That character is Scurge, played by Karl Urban, who becomes Hela’s henchman, after she invades Asgard.
Scurge easily has the best character development in the entire movie.
You can see he likes how Hela gives him an important position, however at the same time, he feels guilty about the bad things that Hela orders him to do.
It was great to see a henchman in a movie that would not just blindly follow the villain, without any sign of a conscience.

And, even though I do not think this movie is the masterpiece it is being made out to be, it is still a lot of fun.
Thor: Ragnarok is one of those movies that is just entertaining the entire way through, due to its constant comedy and action scenes.
If you go to see it, you will definitely have a lot of fun.
It may not be a masterpiece but it is still a good watch.