You know, I was really looking forward to Issue 173 of The Walking Dead.
After the brilliant cliffhanger in the previous issue, which saw Beta about to ambush Jesus and Aaron, I could not wait to see what would happened.
I was really afraid Jesus or Aaron might die and that Beta’s return would have a massive impact on the story going forward.
However, what I did not want to happen was for Beta to appear only so Kirkman could kill him off, thus tying off the loose end of the Whisperers.
Unfortunately, that is exactly what happened.
Instead of Beta’s return presenting a turning point in the story and making the Whisperers a legitimate threat again, he is just killed off when Aaron shoots him.
It makes you wonder why Kirkman even bothered keeping Beta alive.
Why didn’t he just kill Beta in The Whisperer War, there was no reason to keep him alive since he dies pretty much immediately when he shows up again. 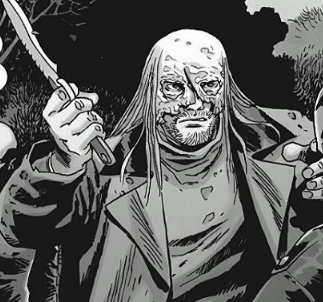 Although I did like the reveal of Beta actually being a famous basketball player before the apocalypse, his death here is incredibly disappointing.
Kirkman should have just revealed who he was and then killed him in The Whisperer War.
I can see why Kirkman wanted to kill Beta off though, considering he is bringing in a new group of survivors into the story and wants to focus on them.
But ending the Whisperer story like this is really disappointing and left a bitter taste in my mouth.
The Whisperers should have gone out with a bang, not a whimper.
The rest of the issue is alright and filled with your regular The Walking Dead character development.
It looks like Maggie is going after Negan next issue and I really hope she does not kill him.
We already had one interesting character die in a disappointing way, we do not need a great character to die that way as well.
There is also a scene where Carl helps out Sophia only for Lydia to glare at them jealously.
This could prove to be interesting, considering Lydia’s upbringing with the Whisperers.
Maybe she will threaten Sophia to stay away from Carl.
By far my favourite scene in the entire issue though was when Laura berates Dwight for his treatment of Rick.
Dwight is a really good character but recently he has been going downhill with his antagonism towards Rick so it is good to see someone put him in his place.
Hopefully Dwight will realise how he is acting and get on the right track again.

The issue ends with Eugene’s group arriving at the place where they will meet the Ohio group only to be ambushed by a new group with guns that has bayonets attached.
The Ohio group is very cautious it would seem, or maybe they are just evil, we’ll have to wait and see.
Overall this issue was pretty disappointing due to Beta and essentially the Whisperers themselves’ demise.
The rest of the issue was alright but this one thing just dragged it down for me.
The Whisperers used to be this great threat but the way Kirkman ended their storyline just made them seem kind of pathetic to me.
They deserved better.
Still, I am interested to see what the future holds for The Walking Dead, with the new Ohio group being introduced.
I will be sure to review the next issue when it comes out next month.

One thought on “The Whisperers go out with a whimper in The Walking Dead Issue 173: Final Fight”