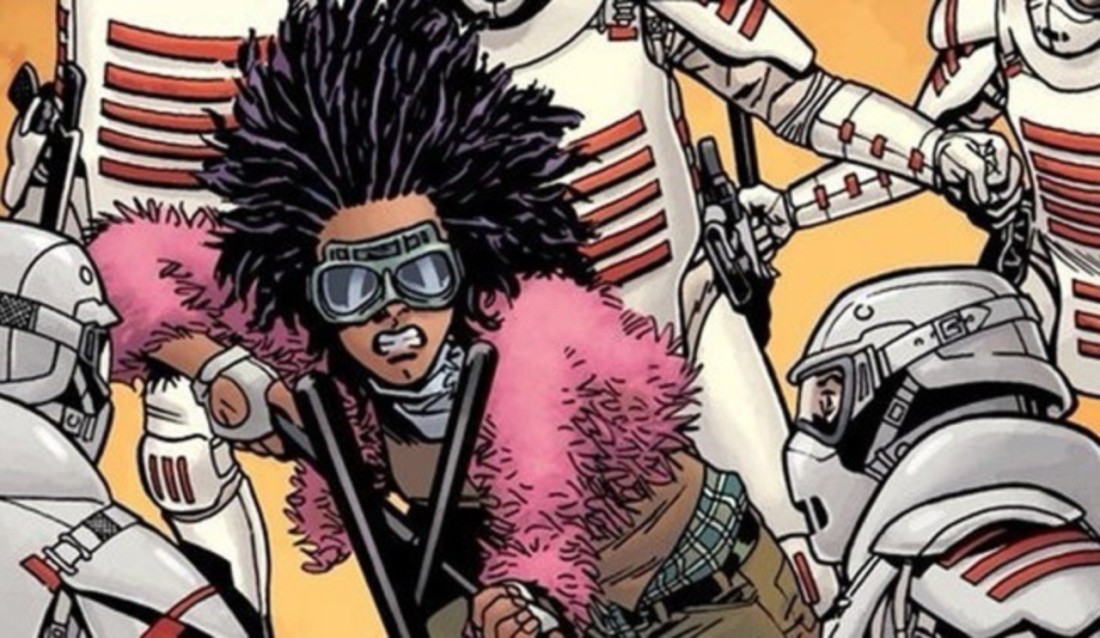 It seems like Game of Thrones may have influenced The Walking Dead in issue 178, or at least that is what everyone else is saying about the character of Sebastian.
This issue really showed how much of a jerk he was and naturally this, combined with his spoiled upbringing, has caused many people to compare him to the hundreds-of-people-praying-for-him-to-die character, Joffrey from Game of Thrones.
Sebastian certainly is an entitled jerk of a character, as can bee seen in the final moments of the issue when he starts a fight by assaulting Yumiko, Magna and Elodie just because Yumiko would not go on a private tour with him (shudder).
This scene did have the best moments of the issue though, with Princess showing off her skills by beating up a bunch of Commonwealth soldiers after they tried to defend Sebastian.
As someone who did not like Princess previously, it was nice to see her fighting those soldiers for her friends because it made her more likeable.
On top of this, the reveal that came afterwards, at the end of the issue, also had a lot of great implications.
I predicted in my review of Issue 176 that The Commonwealth was built on a class system and Elodie’s comment that, “it’s important we know our place,” basically confirmed this prediction.
Despite the fact that Sebastian just assaulted three people he will not get arrested because he is Governor Milton’s son, while Princess probably will be arrested for trying to defend her friends.
This is an interesting turn of events because, as I mentioned in my review of Issue 176, this probably means Governor Milton sees herself as above everyone else and will want to take over Alexandria and the other communities.
These final moments of the Issue were really entertaining and had some great revelations.
Another great moment in the issue was a touching scene between Michonne and Elodie, where Michonne reconnects with her and assures her that, even if Elodie hates her, she will always be there for her.
This was a great part because of Elodie’s constant changing expression across the different panels as Michonne assured her that she would be there.
However, in comparison to these moments the rest of the issue was lacking.
It was revealed in the beginning of the issue that Mercer and George were just letting off steam when Siddiq overheard them talking about overthrowing Milton, which makes the previous cliffhanger feel very misleading.
Then there was the part when Sophia confronted her mother about Dante, which I did not like at all.
It had the potential to be a good scene but it was ruined by how over-the-top Sophia was.
Yes, Sophia did have justifiable reasons to be angry about Maggie and Dante’s relationship but she went too far by calling Maggie a f*#@ing w!*#e .
This over-the-top reaction was made worse when Sophia seemed to be completely over it and jokes about it with Maggie minutes later.
There was also a weird inconsistency this issue with Stephanie.
When she was first introduced in Issue 176, Stephanie was Caucasian but in this issue she is African-American and this was a little odd to see.
Overall though, this issue was still good, despite the weird inconsistency and the over-the-top Sophia scene.
It certainly has me intrigued about what Governor Milton will do when she reaches Alexandria two issues from now.