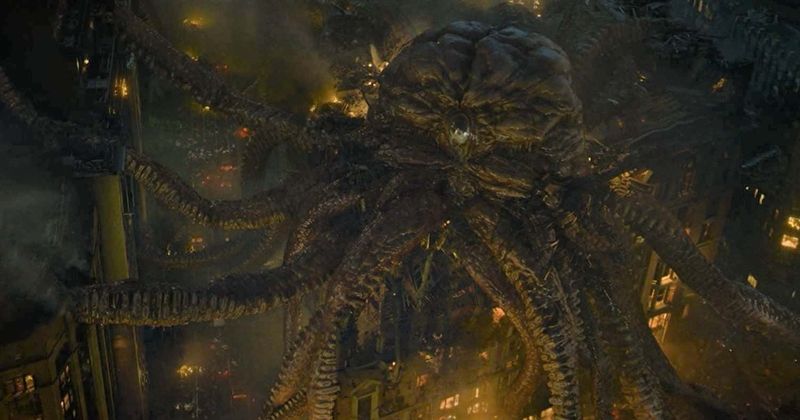 I can easily say that the fifth episode of Watchmen, “Little Fear of Lightning” is the best episode of the series so far.
Directed by Steph Green, it mainly centers around the character Looking Glass, who was a character I had been intrigued by since the first episode, and this episode definitely makes him my favourite.
His arc in “Little Fear of Lightning” is just fantastic, with Tim Blake Nelson doing an amazing job bringing his trauma to life.
This trauma was created in 1985 when Looking Glass was just Wade Tillman, a young, conflicted and naive Jehovah’s Witness, played by Philip Labes.
His nativity is proven by how he literally approaches the most aggressive looking people at a carnival and is then dragged into a house of mirrors by a female member who manipulates him into getting undressed and then steals his clothes.
Ironically, this ends up saving his life as the mirrors seem to save him from the psychic blast unleashed by the alien squid Ozymandias drops on Manhattan, killing half its population.

The squid is then shown in all of its glory and I was honestly surprised by how well it is incorporated into the story.
I had always supported Zack Snyder’s decision to make Ozymandias blame Dr Manhattan for the attack in his adaptation because I felt the giant squid would not work on screen.
Well, “Little Fear of Lightning” proved me wrong with a perfect portrayal of the hoax.
The effects the event had on Wade is also perfectly displayed, hinting that his truth telling ability may have been generated by the blast that traumatized him.
Wade’s trauma is so great, in fact, that it is the reason he joined the police force after the White Night because it allows him to wear a mask made of a material that will supposedly protect him if another giant squid were to attack.
It seems that Laurie’s speech in the previous episode about people wearing masks to hide from the pain and trauma applies more to Wade than it does Angela.
Unfortunately, the Seventh Kavalry are fully aware of this trauma, using it to manipulate Wade by sending one of them to his support group and then purposefully alerting him to her Seventh Kavalry affiliation to lure him into a trap.
Inside their base, Wade learns that they are experimenting with teleportation and is quickly apprehended when he confronts them.
Following this, we get the reveal that Senator Joe Keene is involved with the Seventh Kavalry.
While this was expected, it did led to some interesting comments from Keene about his and Cheif Crawford’s connections to the Kavalry.
One especially interesting thing to note is that Kenne calls the Kalvary racists, implying that he is not on their side ideologically and may just be using them for a greater purpose.

What this purpose is remains to be seen but it is clearly not aligned with Trieu and Will’s because Keene wants to know who murdered Crawford.
So the Seventh Kalvary, and Will and Trieu have different monstrous goals that our main characters will have to stop.
Sadly, Wade looks to have impeded this because he turns Angela in to Laurie at the end of the episode, both to protect her from the Kavalry and because he learns the truth behind the squid attack.
Keene gives him a video of Ozymandias confessing to how he hoaxed the squid attack, killing millions of people to create world peace, destroying Wade’s entire perception of what is real.
He also somehow planned for Robert Redford to become President so it will be interesting to see how he managed to figure that out.
From here, the episode goes to Ozymandias’ story where he begins his escape attempt.
Shooting himself out of his prison using the catapult, Ozymandias is revealed to be on one of Jupiter’s moons and uses the dead bodies of his clone servants to create a message for a satellite, “SAVE ME D-”.
We don’t to get to see the entire message before Ozymandias is pulled back into his prison by the game warden but it is most likely either Dr Manhattan or Dan AKA Night Owl.

Although, considering Dan is supposed to be in prison this seems unlikely.
As for Dr Manhattan it is highly implied that he is the clones’ creators after Ozymandias is arrested by the game warden and declares that their god has abandoned them.
Why Dr Manhattan would leave his creations, though, remains to be seen, if he is their creator that is.
Either way, the ethical questions about the concept of clones is something Watchmen is tackling very well, as displayed in this episode both through Ozymandias’ servant clones and the pet clones that Wade’s ex-wife is shown to be experimenting on.
This leads to the incredibly dark scene with her supposedly incinerating the clone of a dog.
Funny, how I have seen Ozymandias mercilessly dispose of hundreds of clones and yet it’s the dog that gets to me.
In any case, “Little Fear of Lightning” ends with the Seventh Kalvary converging on Looking Glass’ property, ready to kill him because he has served his purpose and knows too much.
I was horrified when I first saw this because the episode had made Looking Glass my favourite character and I do not want him to die but, after thinking about it, I am sure he is probably safe.
After all, if he was going to die this way the episode would not have ended before his death, as the death itself would be the cliffhanger.
That said, we will probably have to wait a few weeks to know Looking Glass’ fate because it seems we will primarily be getting Angela’s point of view next episode, as she experiences her grandfather’s memories through the Nostalgia drugs she took after Looking Glass turned her in.
I would have to say that “Little Fear of Lighting” is my favourite episode of Watchmen so far, exploring trauma brilliantly through Wade Tillman and his alter ego, Looking Glass.