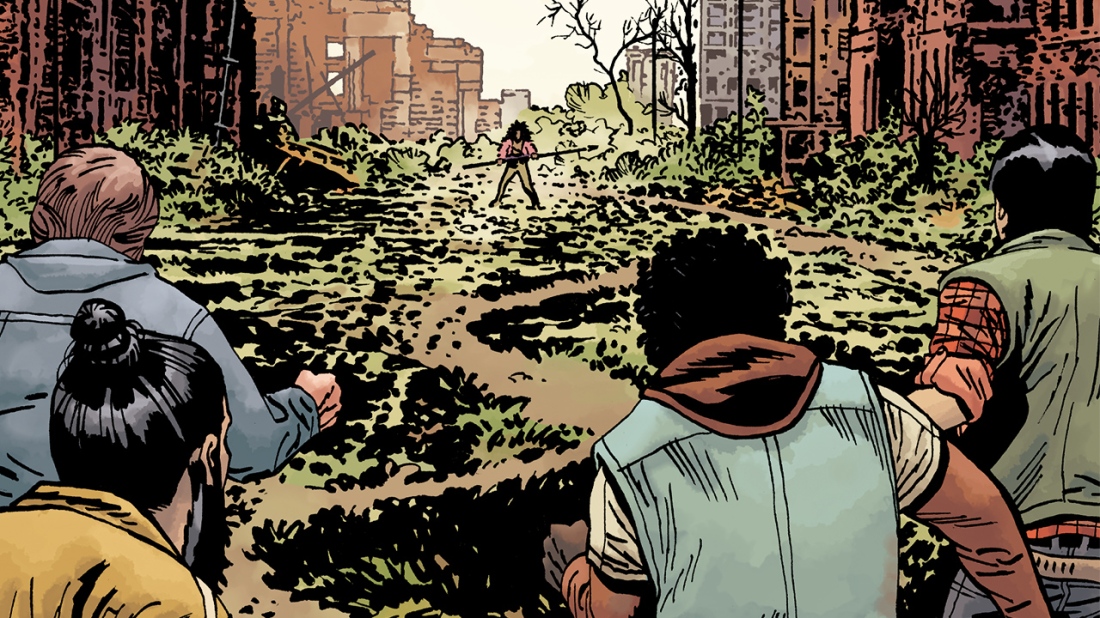 Aside from Dwight’s death and some interesting political commentary, there has been very little that I have found to be investing in the last ten issues of The Walking Dead.
However, Issue 188, “Falling into Place”, seems to set this up to change.
The issue is average, just like many other issues in this arc, but it thankfully looks to be the one that will set the wheels in motion for the Commonwealth’s civil war.
Initially, this does not appear to be the case because Mercer is quickly arrested at the beginning of “Falling into Place”, before he can set his revolution into motion.
But, by the end of the issue, this revolution looks to be gaining full steam as Laura sets out to recruit George and the rest of Mercer’s men to rise against the establishment.
This looks set to commence next issue because the cover features Laura and two others storming the cell that Mercer is being kept in.
Rick and Michonne seem to have caught on to Laura by the end of the issue though, so it will be interesting to see what they do.
Speaking of Rick and Michonne ,this issue continues to disappointingly move away from their conflict, which was set up at the end of Issue 186.
It still feels weird to see that they have made up after Rick explicitly said he would never forgive her for putting him in a situation where he had to kill Dwight.
Despite Robert Kirkman seemingly abandoning Rick’s role to play in the upcoming civil war, Mercer thankfully continues to be a key player.
He gets one of the most interesting scenes in the issue where Pamela confronts him about his actions, only for Mercer to rightly criticize her hypocritical actions.
Along with the brewing the civil war, there is another feature that looks to bring much intensity to the next issue.
This is the cliffhanger of “Falling into Place”, which sees a heard of Walkers heading straight for Eugene and Stephanie, who have been left to work on their train.
While I did like this cliffhanger, the way the issue built up to it is a little contrived.
It all starts when Carl, Jesus, Arron, Dante and Siddiq, who were sent by Maggie to check in with Rick at the Commonwealth, come across Princess.
The synopsis of this issue tries to be dramatic with the line “is Princess friend or foe?” but we all knew she was not going to be.
This turns out to be the case when she runs away, only for them all to run into a herd of Walkers to create some artificial tension, oh joy!
Even though I did not like how obviously set up this scene felt, I will admit it did lead to some good banter between Carl and Princess.
I chuckled when Carl told her that being a loner is “total bulls*!t” and she replies, “you don’t have to curse.”
It makes me wonder what a scene between Princess and Negan would be like.
She would be horrified.
After this, the group diverts the herd and it unfortunately reaches Eugene and Stephanie at the end of the issue.
As for their fates, I am unsure if Kirkman will kill them off or not.
Eugene has become a very important character in the comics and I do not know if Kirkman would kill him off right after Dwight.
As for Stephanie, I find it unlikely she will be killed of because we just met her and she has not received much proper development yet.
Still, I do have some hope that this herd and the coming civil war in the Commonwealth will finally bring the excitement needed for this arc.
Overall, “Falling into Place” was another average issue in The Walking Dead.
Things look to get more exciting in the next few issues but, if they do not then I cannot see the Commonwealth story arc being anything better than just average.