Episode Twelve, “Katana vs Chainsaw” is the final episode of the Chainsaw Man adaptation’s first season, and what a fantastic point to end it on.
Directed by the series’ overall director Ryū Nakayama, “Katana vs Chainsaw” picks up with the fight between Aki and the Ghost Devil the previous episode ended on.
Aki is currently being strangled by the Ghost Devil and passes out, only to hallucinate a prior exchange with Himeno, where she offered him a cigarette, only to take it back when she learned he was underage, promising to hold onto it for him.
When Aki opens his eyes, the Ghost Devil is holding out a cigarette with “EASY REVENGE” written on it.
Some part of Himeno seems to have survived inside the Ghost Devil and, remembering what she told him about the Ghost Devil only being able to see through fear, Aki uses this to climb the Devil and decaptitate it, leaving only Sawatari to deal with.
Before Sawatari can call on the Snake Devil, however; Kobeni sneaks up behind her and puts a knife under her throat.
Aki asks why she stayed with Public Saftey, causing Kobeni to humorously respond that it was because their bonuses are coming up.
While this is happening, Denji and Power are riding up in an elevator to confront Katana Man, only to stop on a floor full of zombies.
Rather than take the elevator up away from them, Power instead launches herself into the zombies, crying out for Denji to watch her slaughter them.
Instead, Denji takes the elevator up, while an oblivious Power continues to obliterate the zombies
Eventually, Denji reaches Katana Man, who explains that he is prepared to give up so long as Denji allows himself to be killed by him.
Denji refuses and Katana Man attempts to manipulate him, again bringing up Denji not feeling empathy because he apparently lacks a human heart.
Denji may not be smart but he is clever enough to see through this and he cheerfully refuses again, leading to the final fight between him and Katana Man.
The two crash out of the building, eventually taking the fight atop a train with some truly excellent CGI.
They eventually crash inside the train, with Katana Man using his speed ability to cut both of Denji’s arms off before demanding he apologise for his grandfathr’s death.
This was Katana Man’s mistake, however, because Denji uses this to lure him into another attack, drawing his attention to his head while Denji uses a chainsaw in his foot to cut Katana Man in half.
“Didn’t the geezer teach you that beasts shouldn’t trust anything a hunter says?” Denji shouts, showing exactly what he learned from Kishibe and how much his training paid off.
When Katana Man regenerates, Deni ties him up to the train tracks.
However, much like Katana Man wanted satisfaction by killing Deni to avenge his grandfather, Denji too wants satisfaction for Himeno’s death so he decides to hold the contest to end all contest.
Aki then arrives and Denji gives the rules of the contest.
He and Aki will kick Katana Man in the nuts until the police show up and whoever gets the loudest scream wins his family jewels.
Aki is reluctant, until he again looks at the “EASY REVENGE!” cigarette and decides to compete.
Watching Deni and Aki kick Katana Man in the nuts over and over again to wholesome music was absolutley hilarious.
I like to think that Aki got the loudest scream as Katana Man’s screams serve as a reqiuem for Himeno.
The credits then begin to roll, with Makima reporting on the events of the raid and what they learned, primarily that Sawatari’s deal with the Gun Devil was to obtain Denji’s heart.
However, before they could find out why, Sawatari was killed by the Snake Devil in an apparent suicide part of her contract with the Gun Devil.
Makima then tells her superior that the Gun Devil parts they recovered have begun to move towards the main body, although the ED, “Fight Song” by Eve, begins before we can learn which direction it has started to move.
The ED shows Denji, Power and Aki going about their daily life after the Katana Man raid and it was a good final ED to end on.
Pretty much all of the ED’s are high quality, with them having great music and visuals, showing just how much care went into this anime.
After the ED, we get another anime original scene of Aki, as we see him go outside and smoke the “EASY REVENGE!” cigarette in what is probably his final goodbye to Himeno.
As this is happening, Denji is having a nightmare about the mysterious door, just like he did in Episode One, tying the opening of Season One up with its ending.
Just as Denji approaches the door, he hears Pochita on the other side, ordering Denji not to open it.
The episode then ends with a teaser, as an unseen female character walks through an alleywar towards a cafe, stating, “Tell me Denji, between the country mouse and the city mouse, which would you rather be?”
To anime only watchers, this tease will not mean much but, as a manga reader, it makes me incredibly excited for whatever follows, whether that be a Chainsaw Man Season Two or a movie to cover the next arc.
Overall, “Katana vs Chainsaw” was a fantastic final episode, delivering incredibly well animated fight and nut kicking scenes, alongside excellent music.
It is absolutley apparent that the people who made this anime love Chainsaw Man, as this is easily one of the best adaptations of a manga out there.
Hats off to you and your team Mappa.
I cannot wait to see what comes next for the Chainsaw Man anime.

Manga Spoilers:
As a manga reader, it was exciting to see Reze get teased at the end of the episode.
She is one of the best antagonists in Part One and brings up one of the big themes of the story, which is the whole country mouse vs city mouse argument.
I am curious to see if the Bomb Girl Arc that centers on her will be adapted as a movie or in a Season Two.
After all, the Bomb Girl Arc is short enough to be contained in a movie.
Although, it might be better for the pacing of the series overall for it to be kept for a Season Two.
Season Two could be the Bomb Girl and International Assassins Arc, and then Season Three could be the Gun Devil Arc and the Control Devil Arc, before moving onto Part Two.
Whichever it turns out to be, though, either a movie or Season Two, I will eagerly anticipate the return of the  Chainsaw Man anime because of how amazing this adaptation was. 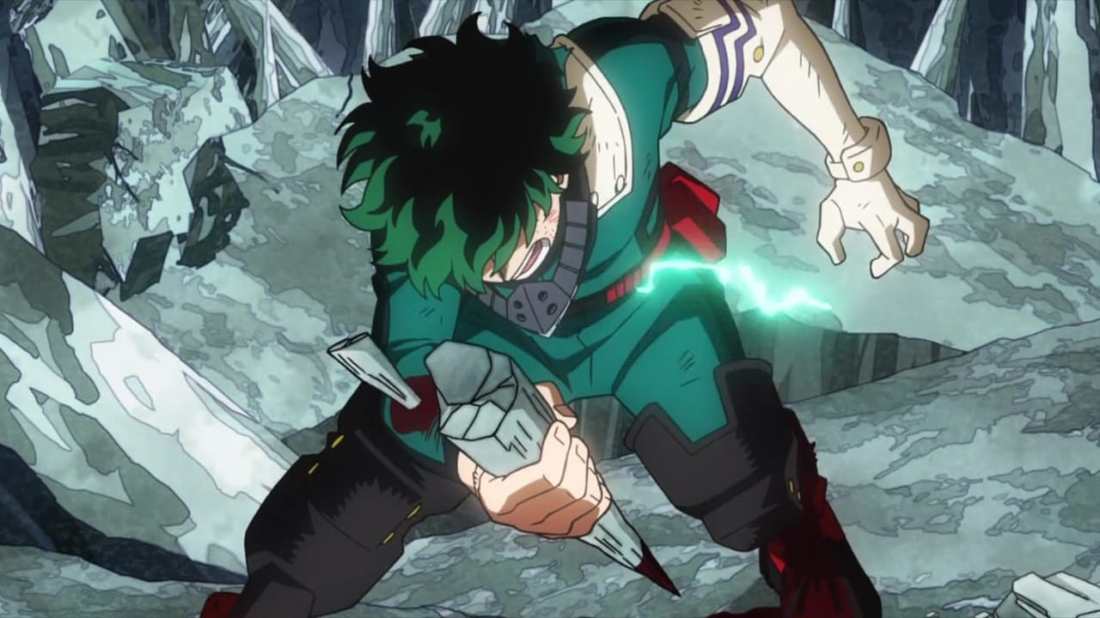 For an episode titled “Unforeseen Hope”, My Hero Academia’s twelfth episode of the fourth season is almost anything but hopeful.
The heroes just seem to get kicked down every time they get up this episode, with Overhaul utilizing his quirk in the most unique and disturbing of ways.
He actually destroys his and Nemoto’s bodies and then fuses them together to create an even more powerful form.
This goes to show not only how powerful Overhaul is but also how cruel he is, especially in comparison to the League of Villains.
Despite not being good people, the League actually do care about one another.
Overhaul, on the other hand, appears to not be capable of empathy at all, throwing his allies away like pawns and using them for his own gain.
This is taken even further with his treatment of Eri, as a flashback shows he cruelly dissembled and reassembled her every time her body got too tired to handle the experimentation.
Honestly, Overhaul is giving All For One a run for his money in terms of evilness.
Still, you cannot deny his intelligence in using his quirk the way he did, which even allows him to defeat Nighteye’s foresight, mortally wounding him.
Nighteye, a character who can literally see into the future, being defeated by Overhaul shows how much of a threat he is.
Not only this, but Nighteye’s foresight also predicts a dark future, as the hero says he saw that Overhaul would kill him and Deku before escaping with Eri.
Along with this, we also got more of an insight into Nighteye’s reasoning for not using his quirk, as he believes that by using it on All Might he has condemned his friend to a horrible death.
However, despite all this misery, I do suppose the episode title is right in one way as Deku promises to change the future and save Eri.
It will be hard for him to do so, though, because he will have to contend both with Overhaul’s over powered strength and his emotional manipulation of Eri, as shown when he uses Nemoto’s quirk to guilt trip her into coming back to him.
Poor Eri.
I just want to wrap her up in Lemillion’s cape and never let her go (epic foreshadowing).
In any case, alongside the great fight with Overhaul, we also got more insight into Rock Lock and the League.
Rock Lock’s development shows us why he was so tough on Deku and Mirio because he has a kid of his own and was just looking out for them.
As for the League, it appears they have made a new plan to make Overhaul “cry like a baby”, as Toga put it; something I will be very interested to see.
The episode ends with the party literally being crashed as Ryuko, Ochako, Tsuyu, and Nejire smash through the ceiling using the Eight Bullets member Rikiya Katsukame.
Overall, “Unforeseen Hope ” is another great episode of My Hero Academia.
My only big criticism is that I feel some of the shots of Overhaul’s new form look a bit off animation wise because of how static he is, which really drew me out of the action and drama.
Other than this, though, “Unforeseen Hope” is a crazy episode that is sure to lead to an even crazier one.